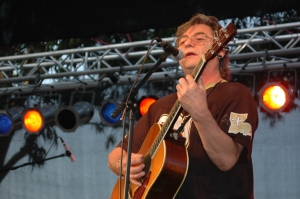 Lead singer and songwriter Bruce Bermudez was born and raised in New Orleans, where he started singing rock n roll and blues in the New Orleans French Quarter. His soulful singing voice drew the attention of the seminal 1960’s folk group, The New Christie Minstrels and Bruce spent the 60’s touring the world including performances for Queen Elizabeth at the London Palladium, and for the President Lyndon Johnson at the White House. Since his days with the Christies, Bruce has pursued a more decidedly rock sound, but is still influenced by the multi-voice harmonies of the folk era. In addition to being a singer, songwriter and musician, Bermudez is also an accomplished sculptor, painter and graphic artist. His works include the “Jimi Rocks” tribute to Jimi Hendrix guitar of the Sunset Boulevard “Guitar Town” public art project, sponsored by Gibson Guitars. Bruce is married to the Catahoula’s other lead singer, Pamela Clay.